Kickstarting your own ELT publication

We previously interviewed Marcos Benevides, award-winning ELT author, about his thoughts on Extensive Reading, and his motivations for adapting the world-famous Choose Your Own Adventure series for learners of English as a foreign language. This time he’s back with a brand new multi-path graded reader venture, Atama-ii Books, which has been successfully funded via Kickstarter!

Can you tell us a bit about your new project, and how it can benefit teachers and learners of English? 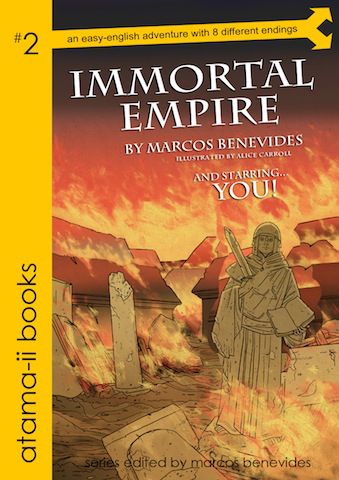 Yes, Atama-ii Books is a series of multi-path eBooks in easy English, targeted at beginner-level readers of any age. It’s different from my previous series in that the language level is much lower, at around 300 headwords, yet the story plots are just as engaging, if not more.

We have a wider range of stories, from the more traditional astronauts-and-zombies type adventures, to some others that will really make the reader think. Some stories are based on historical or current events, for example, which I think many teachers will appreciate.

Another difference is that, as original stories rather than adaptations, we are able to make this series better structured for the classroom (though it’s just as appropriate for individual reading). For example, the word count per page is very tight, and there is a great full-color illustration every 100 words or so to aid comprehension.

However, the really great benefit of multi-path stories for ELT remains that learners will read different branches of the same story several times, creating a natural controlled practice effect through repetition.

Why did you choose to go the crowd-funded route for this venture?

Having worked on several projects for different publishers, I found myself increasingly frustrated by the lack of control I had once a title was launched. I would spend a couple of years pouring my heart and soul into a project, and then, after launch, it was like, “OK-thanks-bye; we’ll take it from here.”

I’m very interested in marketing and promotion, so it is painful to watch people who don’t love or understand your project often bumbling around and mishandling it because they have too many other projects to promote as well. Unfortunately, this is all too common with larger publishers.

So what I really wanted, after several publisher-sponsored projects, was to try doing it all myself. I also wanted more direct contact with the readers who will eventually decide whether the series takes off or not. Crowd-funding allows for both.

What advice would you give to others hoping to crowd-fund their own publication?

It’s a lot of work! First, you need to make sure you have a viable product that is presented clearly and attractively. It took me months to finalize my Kickstarter page, with input from many friends.

Second, figure out the lowest possible amount of money you need to successfully launch your project. Remember, if you don’t reach that number, you will get nothing—but if you go over, that’s fine.

Finally, set aside a month in which to do your fund raising. This part is very time consuming—and it’s also nerve-wracking!

Marcos Benevides is a Japan-based teacher and ELT materials writer. He co-wrote the reading coursebook Fiction in Action: Whodunit (Abax, 2010), which won both the Duke of Edinburgh and the British Council ELTon Awards. He also co-wrote Widgets: A task-based course in practical English (Pearson, 2008), and has successfully launched his own series of multi-path graded readers via Kickstarter. He teaches at J. F. Oberlin University in Tokyo.