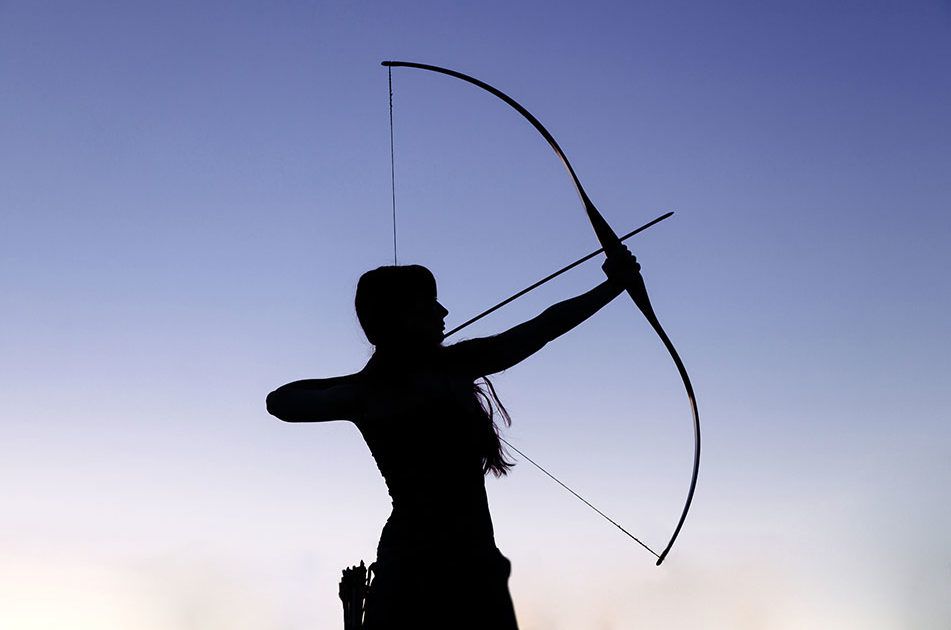 The lady archer: from invalidism to the New Woman

Last week, the secretary of my archery club sent us the latest issue of our newsletter, which included the photo below. He said to have chosen it at random, but I jumped for joy when I saw it.
What do you see here? There is an elegant Victorian lady, with an elaborate hat and a jabot. However, she is in the process of stringing her own longbow which, believe me, requires skill and a certain amount of strength. Her skirt is also shorter than usual (her ankles can be seen) and tied at the hip. Her top is tight and unadorned and she uses her belt to carry her equipment. On one hand, she is following the conventions of the period, which demanded that ladies dressed like ladies at all times (this applied to gentlemen as well). On the other, it is obvious that she has given some thought to have freedom of movement. As I was instructed at the archery beginners’ course, tight clothes are advisable to prevent tangling yourself with the bowstring when you release the arrow.
This photo is a historical document of the changes in women’s social roles in the late Victorian era. In the second half of the 19th century, female physical activity was considered “dangerous” and “masculinising”. A cult of invalidism was developed in art, according to which a permanently ill woman would be regarded as an ideal of feminine virtue: i.e. the consumptive, self-sacrificing Marguerite Gautier, heroine of the novel The Lady of the Camellias and the opera La Traviata. The idea behind the archetype was that a physically weak woman was more likely to be docile and submissive. By encouraging female fragility, invalidism encouraged dependence and passivity. Moreover, invalidism also perpetuated the stereotype of people with disabilities as defenceless, deserving pity and compassion (but not being treated as equals).
In contrast, the last decade of the 19th century and the early years of the 20th saw the rising of the “New Women”. Their priority was not being an ideal of virtue, but getting a job. They also wanted an education at one of those universities which had recently started to accept female students. The pursuit of those interests often implied having to move to another city and living away from the family unit, which gave them more space for independence and freedom. Think about Anne of Green Gables, heroine of the novels by Lucy Maud Montgomery (1908), who wins a prestigious university scholarship and works as a teacher and a writer. Her affinity to her beloved Gilbert is based on the fact that they are the top students of their class (intellectually equals). More significantly, Anne is in perfectly good health and is full of vitality: she does not think twice about climbing a roof for a dare, or riding a bicycle to school. The “New Women” were finally able to engage in sport and physical exercise without being branded “unfeminine”. Sport started to be regarded as a good opportunity for both genders to socialize. In fact, high class ladies were encouraged to practice archery, as it was considered that they would acquire an elegant back posture.
Nowadays, in the 21st century, I am female, I have a disability and I am an archer. I wear jeans and a long-sleeved T-shirt (it protects my arms from bruises), but I have the same enthusiasm as this elegant Victorian lady archer. I regard this photo as I tribute to my female ancestors, and the challenges they had to endure so that the women of today can live their lives the way they choose.