#AcWriMo. Shut up and write! By our Social Sciences Correspondent

After having described the difficulties I face when attempting to write from home, and realising that I can only spend so much time in coffee shops before (a) they ask me to leave or (b) I consume way too much caffeine and cease to be able to use a pen, I’ve been exploring how to become more productive while sitting at my office desk in the university.  The problem always seems to be one of priorities: when I’m in my office, I find it incredibly hard to prioritise writing the dreaded academic papers.  Emails constantly interrupt me, and I tend to be fretting about all the non-paper-writing tasks I should be doing. 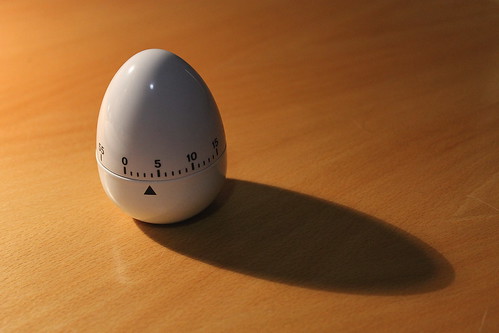 With this in mind, I signed up for a ‘Shut up and write’ session here at Nottingham.  I remember we had these at Warwick, and although I never actually attended one, I do recall my friends at the Research Exchange being quite enthusiastic about the idea.  Essentially, you apply the Pomodoro technique® (a registered trademark by Francesco Cirillo – more here), the idea being that you write for a certain amount of time (in Nottingham’s case 20 minutes) and then take a short break (5 minutes).  Apparently, it’s all about being more productive – something I definitely aspire to!

The session I attended last week was scheduled to last for two hours, more or less, and entailed a few minutes of the facilitator introducing the technique, followed by four rounds of the timed cycle.  Here are my thoughts:

I’m aware that everything I’ve described so far sounds a little negative.  However, I did manage to get A LOT of words written, so clearly the technique was working its magic despite my misgivings.  And since that session, I’ve used the technique again – you guessed it, in a coffee shop!  I’ve discovered that I respond really well to the principle of short bursts of activity, where writing’s concerned.  My problem really lies in not letting myself wander off to the tasks that really can wait, and making sure I’m writing in an environment in which I feel comfortable.  As I said, I struggle to write in my university office, and I’m still trying to get to grips with how to manage that.

So what do other people think?  Are there lots of Pomodoro technique writers out there?  And how much does our environment influence our ways of writing?  And the biggest conundrum I seem to face: when my line manager sends me an email, how many minutes am I allowed to ignore it for?!

Bernadette Divall (Bernie) is a Postdoctoral Research Fellow in maternity care at the University of Nottingham’s School of Health Sciences.  She is currently working towards establishing a panel of service users who will inform research undertaken within the maternal health research group.  Right now she is enjoying the glow of having recently passed her PhD, which centred on narratives of identity, specifically clinical leadership in midwifery.  Away from the world of funding bids and publication worries, Bernie spends her time raising three children, tap dancing, feeding people, crocheting tiny animals, and generally being sociable.

This blog is not affiliated with, associated with, or endorsed by the Pomodoro Technique® or Francesco Cirillo.