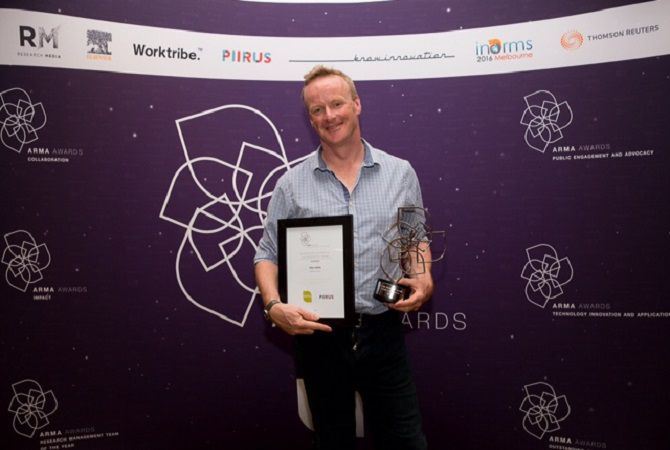 Me and Sacheen – in the social media spotlight

In 1973 Marlon Brando famously sent Sacheen Littlefeather to accept – or rather reject – his Oscar for the Godfather. At this year’s ARMA Conference, as I accepted the piirus.ac.uk sponsored award for Technological Innovation and Application, I wished I’d had Sacheen on speed-dial. She could have saved me. I’m not great in the spotlight.

Of course, the ARMAs are a much bigger affair than the Oscars, but the comparison still stands. It seems unfair to focus on a single winner when there are so many worthy contenders for the prize, particularly in ‘technological innovation and application.’ It’s a category that encompasses a wide and diverse range of pioneers who are using social media and other technologies to support academics in navigating the strange land of research funding.

Some are academics themselves. Dr Nadine Muller, for instance, of Liverpool John Moores writes an excellent blog about being a new academic, Prof Pat Thompson of Nottingham writes about both her own work and the challenges of applying for funding, and Prof Andy Miah at Salford is a strong advocate of using a range of social media to further and supplement his own research.

Others do similar roles to me. Adam Golberg (once again, Nottingham: is this a trend?) writes thoughtful, longer pieces on underlying issues in research funding. On the other side of the world Tseen Khoo and Jonathan O’Donnell of Melbourne give a different perspective in ‘The Research Whisperer’. Elsewhere whole institutions are embracing new technologies to support their academics, such as the Bournemouth Research Blog, which is refreshing, direct, open and honest, and manages to cut through the usual institutional website blandness (summed up perfectly by XKCD).

To me, embracing social media was a no brainer. Whilst I’m an X-Generationer, and therefore pre-digital by definition, I had no problems recognising that social media offered us a much richer and more interactive way of communicating with our academics. When I started at the University of Kent in 2003, I was asked to send out a memo to Directors of Research about a particular funding opportunity. A memo? I felt like a character in the Hudsucker Proxy. Instead I used emails, and wrote a termly newsletter, but still: I wanted a way of engaging and conversing with our staff in a more interactive way.

A blog seemed like a natural solution. I set up Research Fundermentals in 2009. It started as a repository for articles from the newsletter and alerts about upcoming events, but soon morphed into something more: it acted as a meeting place for colleagues from across the University to hear about underlying policy developments, but also to laugh about some of the crazy decisions made by the Research Councils and other funders. It was like a portal into my professional head, and as such is wonderfully cathartic.

Since then it has expanded further, and has allowed me to reach out to those in other universities doing similar work to me, and to academics nationally and internationally. Twitter has allowed me to broaden out the conversation further. For instance, when I wrote about ESRC success rates bottoming out at 10%, I got talking on Twitter to colleagues across the UK and beyond, a conversation that was eventually curated on Storify.

And it is this ability to talk to a huge diversity of people, to be surprised by their insights, to learn from them, and to have your ear to the ground whilst remaining at your desk in your Hudsucker office, that is the joy of social media. Whilst more and more people are recognising this and engaging with social media, many are nervous about doing so. They are worried about damaging the reputation of their institutions, of it taking up too much time, or having nothing to say.

These are all legitimate concerns, but I would suggest that the benefits outweigh these concerns, and the only way of discovering whether they would be relevant to you is to give it a go. You don’t have to do everything at once. You don’t have to Instagram your meetings, whilst posting Facebook updates, Tweeting each decision made and then writing a summary on your blog afterwards.

Instead, dip your toe in cautiously. Sign up to Twitter and just watch for a while. Listen to the conversations of others. Laugh at the surreal flights of fancy. Gasp at the insights and intrigues. Learn what’s happening at Polaris House before anything’s ever formally announced.

And who knows? You might be as smitten as me. Before you know it you’ll wonder how you ever survived without. It will become an indispensible part of your armoury, an essential source of knowledge and intelligence. And, next year, it will be your turn to be that rabbit in headlights as your name is announced at the ARMAs, and you’ll be wishing that you, too, had Sacheen’s number.

About the author: Phil Ward is the Deputy Director of Research Services at the University of Kent. He is one of Jisc’s 50 most influential HE professionals using social media, and his Research Fundermentals blog is well worth a read.