Why is English the dominant world language?

English is spoken as a second or foreign language by an estimated 950 million people worldwide (Saville-Troike, 2006). This is in addition to the 427 million native speakers of English. But how did the English language reach the stage where it is used and understood, to a greater or lesser extent, by more than 1 in 7 of the world’s population?

At its height in 1922, the British Empire was the largest in history, covering a quarter of the Earth’s land area, with a population of over 450 million people. 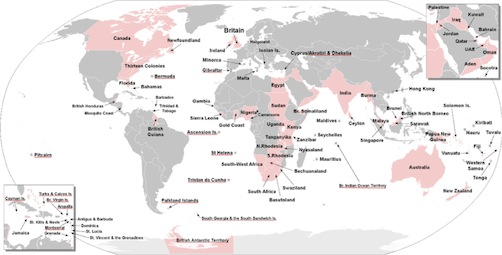 The British Empire, circa 1922 (image courtesy of WikiMedia)

The primary aim of education in the colonies became the acquisition of the English language, and the future academic and financial success of those living in colonized countries came to depend mainly on their English language ability (Phillipson, 1992).

After World War II, when the colonized countries started to gain independence, the English language maintained its influence by being selected as an official or national language by “leaders who were themselves the products of colonial education” (Phillipson, 1992, p.182).

These factors contributed to English becoming either the sole dominant language, or an official language, in over 75 territories with a combined population of over 2.2 billion people (Crystal, 1997).

On July 4th, 1776, thirteen British colonies located along the Atlantic seaboard declared independence and founded the United States of America. The U.S. economy has since become the largest in the world, and the dissolution of the Soviet Union in 1991 left the United States as the world’s sole superpower.

The global reach of America’s cultural, political and economic influence has contributed significantly to bolstering the dominant position of the English language in the 20th and 21st centuries.

America has spawned a significant number of global musical influences, including Michael Jackson, Elvis Presley, Eminem, Madonna, and Bob Dylan. On a global stage, the economic and cultural dominance of Hollywood is unrivaled.

In the information age of the 21st century, a reported 45% of web-pages are written in English, a situation not hindered by the fact that 8 of the top 10 most visited websites in the world (as of Sept. 2012) are based in America.

In the 21st century, China is positioning itself to challenge America for the position of the number one economic power in the world, but whether this will translate to linguistic dominance remains to be seen.

Neither political, economic, cultural, technological nor military might alone can give one language international prominence. It takes a sustained combination of all these powers to achieve that. As a case in point, Japanese did not become a dominant language internationally (although it did increase in popularity), despite Japan’s incredible economic success from the 1960s to 1990s.

Having said this, linguistic world orders do change. English was preceded by Latin as the world’s dominant language, which was put in place by the Roman Empire and perpetuated by education and religion. But the days of Latin were cut short by the rise of the British and American empires described above.

It is theoretically possible that English itself will, at some future time, be succeeded by another language, promulgated by the economic, political and cultural might of its native speakers.

English belongs to everyone

The English language is now argued to belong to everyone who speaks it. Native speakers are said to have forfeited their right to exclusive ownership of English in a global context. Indeed, native speakers of English are outnumbered more than 2-to-1 by non-native speakers of the language. The fact that English now belongs to “everyone or to no-one” (Wardhaugh, 1987) would seem to imply that English will maintain its position as the global dominant language throughout the 21st Century and beyond.