Losing our trousers: The prevalence of American English in TEFL

When I came to Japan in 2006, it was with the then “British English” school, Shane. Students expected to be taught British English in preference to other varieties. Textbooks from British publishers, such as the Clockwise and Headway series, which adopt British English language models, were utilized. Cultural talk frequently focused on British events and institutions, such as Bonfire Night, James Bond, and the Royal Family.

In the years I’ve spend teaching English in Japan since leaving the British English walled garden of Shane (long since sold to a Japanese company), American English has become the prevalent variety in the language models of my lessons.

Are they “pants” or “trousers”?

A good example of this phenomenon is the American English word “pants”, which denotes the item of clothing most Brits would commonly refer to as “trousers”. I have yet to meet a Japanese learner of English, of intermediate ability, who is familiar with the word “trousers”. Students’ complete lack of familiarity with this word has caused me to drop it almost entirely from my teaching vocabulary. I only now mention it when discussing with students the differences between British and American English.

“Pants” is a good example, but it’s by no means the only one. Few students understand “rubbish” or “bin”. They are far more likely to be familiar with “garbage” or “trash can”. And although “college” and “university” are generally both understood to refer to institutions of higher education in American English, in British English the former is normally reserved for institutions of further education. I no longer use “college” in the British English sense, as none of my students would understand me if I did.

It’s not just my vocabulary that’s changed – my spelling has too. I now use “z” where I once used ‘s’ (e.g. “organize”) and “er” where I once used “re” (e.g. “center”). This change has been further encouraged by my word processor’s insistence that British English spellings are deviant.

My pronunciation has not been left unaffected. “Niche” is far more likely to be understood when pronounced the American way (/nɪtʃ/) than the British way (/ni:ʃ/), as is “schedule” (American English: /skɛdʒəl/, British English: /ʃɛdyul/). 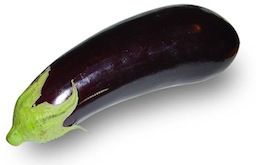 Don’t even get me started on “aubergine”..

It’s not that I’m lamenting the state of affairs outlined above. On the contrary, most of the changes America has introduced to the English language make sense. Take the ludicrously spelled “through” versus the much more logical and simple “thru”, for example.