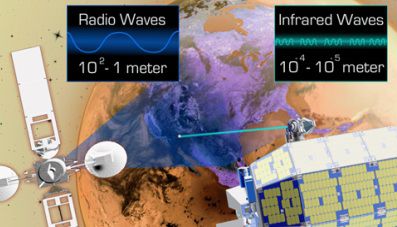 Simulated Emission was the term named by Albert Einstein in 1917 for generating laser. Laser is an abbreviated acronym for Light Amplification by the “Simulated Emission of Radiation”. Generally there are different kinds of lasers, generated from different materials. Including short emit pulses, ruby laser, helium-neon gas lasers, semiconductor injection lasers and telemetry lasers.

The system transmits data in form of several short pulses of light particles per second as mentioned above. The LLCD system consisted of three modules

In the LADEE rover, optical module is fixed on the exterior of the spacecraft, having a telescope, which transmits laser beam back to earth ground stations accurately. The modem module is enclosed in the LADEE space craft, is very much similar to Internet modem, whose function is to transmit data at the rate of approximately 622 MBps through infrared laser transmitter. The last but not the least module is the controller module, the functionality of this module was to keep track of the ground stations for accurate pointing. NASA has successfully tested this system and expects to provide a great resource for future space communication. Although optical communication have proved it’s efficiency already but the only thing it lacked was the restriction on lesser distance, which is now covered through laser communication. Along with this added functionality, laser communication not only provides fast and high data rate transmission but also implied on energy and power efficiency usage.