A Telegram from the Unconscious: Martin Amis on Creativity and Style

Was it simple coincidence, or had Martin Amis heard that I was in town and in need of some high-semantic stimulation? Either way it was with surprise that I discovered he would be launching the German translation of The Zone of Interest (a novel which somehow blends love, sex, comedy and the holocaust in one compulsively readable whole) at the Berlin Literary Festival a night before I was due to leave the city. My friend and I secured tickets at the last moment with ease. His German readership, it seems, are a diminutive crowd (my Berliner acquaintance was an Amis virgin), and in fact for commercial reasons his usual German publisher had declined to come aboard with the book at all.

The initial creative spark, he explained, comes in the shape of a ‘telegram from the unconscious’, sent perhaps by a subliminal section of the brain that has been bubbling away with a theme or idea for some time. Discussing the same book at the Chicago Humanities Festival in 2014 he makes a similar point.

“Novels start not with a decision as so many people think…it comes in the form of a throb or a shiver, a frisson, and you recognise the feeling and you know that here is a bit of fiction offering itself to you…You don’t know how long it’s going to be, it could just be a very short short story, but you accept that donnée and I could never sort of disobey that feeling…it’s more as if it’s chosen me than you’ve chosen it.”

In Berlin he also discussed the analogy, often used to describe the creative process, whereby the author gives birth to his fictional baby. He tweaked the analogy, however, and suggested that the author was rather more like a midwife, and thus responsible for easing the baby’s safe passage into the world. The next duty, then, is to sever the umbilical cord and so deprive the creative work of its link to the author’s ego. 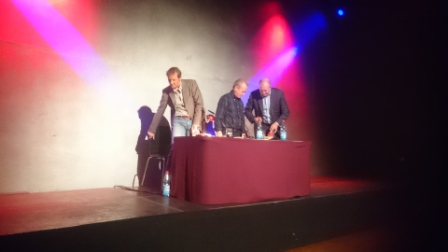 Martin Amis’ personal war is with cliché. ‘A paragraph of Amis, a sentence of Amis, always sounds like Amis’ opines author and critic Sam Leith. At the Chicago Humanities Festival Amis begins to explain how he approaches his writing at the closest level.

“Every sentence has a sort of minimum elegance, I hope, and euphony, and really the process is saying the sentence, subvocalizing it in your head until there’s nothing wrong with it. This means not repeating in the same sentence suffixes and prefixes. If you’ve got a ‘confound’ you can’t have a ‘conform’, if you’ve got ‘invitation’, you can’t have ‘execution’, or an ‘ing’ or a ‘ness’, all of that has to be one per sentence. I think the prose will give a sort of pleasure without you being able to tell why.”

“Beautiful, write that down” cooed his interviewer, Donna Seaman, in response.