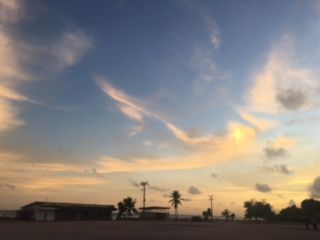 Saying No: Why it’s important to be brave

As we begin 2017, perhaps some of you will have taken a seasonal break from your work. Or perhaps you worked right through: it can be hard to take time out from research and academic life. Some of you might be making New Year’s resolutions and perhaps one of them might be to think of your work-life balance. With this in mind, our blog is taking a look at some of the ways we can handle the many pressures that academic life brings with it, beginning with an account from our regular correspondent Kathy McKay that you might relate to.

Saying no is harder than it looks.

A few weekends ago, the Australian summer decided to be distinctly un-summery and it poured with freezing rain the whole weekend. Should you think this is an Australian version of ‘cold’, I was in the New England region of New South Wales, which earned its name for good reason. The region does freezing well.
I was in Australia with my students for their health practical. That weekend I was asked to go on a farm-stay with the students and other teachers in the program. I said ‘no’. There were enough people already going that I wasn’t necessary. I grew up in the country so I know what a farm does, and, given that classes on-island are every day, I felt the students and I needed a break from each other.

And as the freezing rain poured, I curled underneath a blanket, read my book, and felt very glad to have said no. But I was a little anxious about it at first. I even asked advice before I said ‘no’ officially.

Because I usually don’t say no.

Usually I say yes to everything that is asked of me. I’ve always thought it was “better to be known as the girl who writes on Saturday than the girl who does the minimum”. Never having a secure position, never knowing what my job might look like the next year has created a fear that certainly drives my work ethic. If I’m honest as well, it’s also a little academic FOMO (Fear of Missing Out) as well – I don’t want to miss an opportunity to learn how to do something new or write an article or help my students submit their assignments on time-ish. All in all, better to say yes and figure out how to do it all, than say no and risk that no one will ask again.

This year though is different. The fear is by no means any less – I still have no idea what the future holds work-wise, there is no more certainty. However, my work on-island is different this year. Due to myriad social issues including English being my students’ second language, ‘island time’, and deeply wonky internet, 5 classes a week have turned into 10. I work every day with the students. This contract has no sick leave or off-island (holiday) pay, which has become a pretty normalised part of my academic life over the last few years. It’s fine – it’s the way it is for a lot of new academics – but it also means that I have needed to take care of myself this year. Getting ill on-island is not an option.

It’s hard to get out of a habit, and it’s hard to get yourself out of fear. I needed to be able to say no (and feeling confident doing so) without losing any real opportunities or losing my academic kindness.

So I decided a few things:

1. If I was on-island, and being paid, I would say yes to everything, as long as it didn’t impinge on my students.

I have said to yes to writing viral essays about Santa, helped with grants and reports, whatever was asked and needed. To be honest, ‘island time’ has meant that some of my most productive time has been while waiting for students to arrive to class. I learned to manage my time here really well so I could make the best use of saying ‘yes’.

Finishing an article started on-island: yes. Reading something for a colleague in my Academic Circle of Niceness: yes. A meeting where I wasn’t necessary: no. A weekend on a farm: no. I learned to understand when I was needed versus when I was simply being included.

2. Saying no also meant being brutally honest with how I was feeling.

No more pretending to be invincible Super Academic. Depending on how the term had been, I would sometimes come back to Australia and sleep for two days. Saying ‘no’ during those times was the only possible thing to do. After those sleeping days though, I would wake up wanting to work on something inspiring – something that nourished me – something that made me feel more positive going back to the island. I learned to be more selective.

Even if the academic job market doesn’t seem to boost my confidence, and even if I fear consequences for my career, everyone deserves the privilege of saying ‘no’ when their health is at stake. Everyone includes me!

I am still not great at saying ‘no’ but, in the ever-continuing Academic Circle of Niceness, friends have helped me become more confident in being braver. Friends who know what living on-island is like and so understand its consequent exhaustion. Friends who listen to how I’ve structured my time and are not hesitant in telling me if I let my fear plan my life rather than inspiration. Friends who still listen even when I’ve forgotten that ‘no’ is OK and am struggling under the weight of what I’ve said ‘yes’ to in the meantime.

Academia is a harsh mistress and if you do not take care of yourself, she most certainly does not. In the midst of all the fear and uncertainty, saying ‘no’ is brave because it means that you have chosen your self-care over the Institution. This is a choice that needs to be made more often.