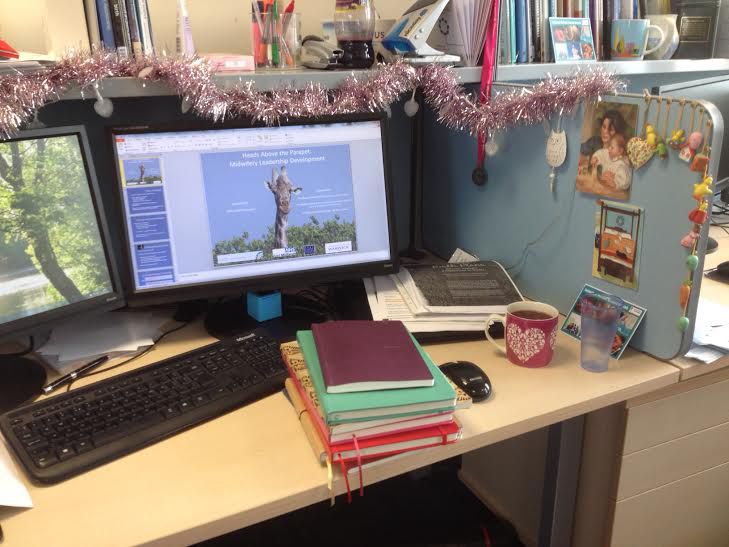 My Shelfie! A real-life research workspace

What are the significant features of your research workspace? We want to get to know some of our Piirus members, and we thought that one way of doing this is to explore our offices or similar dwellings where research happens.  I absolutely love my office – I live in a place that is affectionately known (by me, at least) as the Tower of Doom.  From the outside, it’s somewhat ugly (very tall, very grey), but on the inside it’s a shiny new place where midwifery researchers and lecturers gather.  We moved into the Tower last September, and I’ve since been enjoying the stunning views across Nottinghamshire, and my lovely desk.  In this post, I introduce a few of the things you might notice from this photo of said desk:

I’ll admit, I’m a total notebook snob.  This snobbery goes hand in hand (so to speak) with my pen snobbery: if you have a lovely pen, you need lovely books in which to write with said lovely pens.  You’ll also notice that I have two (two!) computer screens, which is a miraculous way of being, and quite new to me: imagine, I can be working on two documents AT THE SAME TIME!  Or making notes from a paper without having to print it!  I’m sure many people have discovered this miracle already, but it’s pretty novel to me.  Anyway, despite the two lovely screens, I still find it really tricky to write anything straight to a screen without it going past a notebook and fountain pen first.  I currently have notebooks entitled ‘service user involvement’, ‘birth plans’, ‘PowerPoints and presentations’, ‘PhD papers’, ‘random thoughts’… the list is long and the notebooks are many.

Well, it’s July, I know, but I can’t resist a bit of sparkle.  Back in January, when the days were dark and everyone was a tiny bit grumpy, I decided the tinsel from Christmas would have to stay, in order to brighten things up a bit (literally and figuratively).  Time passed by, and the tinsel looked lovely with my fairy lights, and I decided that tinsel is not just for Christmas, it’s for life.  I don’t notice it’s there, most of the time, although it does have a habit of falling down whenever I forget that it’s being held in place by one of my books or folders.  I generally get reminded of its presence by people coming into my office.  There are two reactions: either, ‘You can’t have tinsel, it’s not Christmas’, or ‘Ooooh, lovely sparkle!’  I don’t know who designated tinsel as a Christmas-only activity, but I tend to disagree: as I said, it brightens the place up a bit.  And you really can’t beat a bit of sparkle in your life.

I know!  Ribena?! (other blackcurrant drinks are available…)  I used to be an avowed coffee drinker: the first thing I did on arriving in the office in the morning would be fill myself with a healthy dose of caffeine, and the rest of the day would involve very regular refills.  But I had a dose of the flu back in March, and since then I’ve mostly given up coffee.  I have one cup a day, and I usually get that in my local Costa (other coffee shops are available…) and use it for fantastic writing time – I’ve found imbibing a minimal amount of coffee makes it so much more effective.  I return to the office after my coffee break feeling enthusiastic and motivated, and perhaps a tiny bit hyperactive.

I could go on, but I think that’s an appropriate introduction to my office world.  We’re looking forward to discovering the secrets of other people’s shelves – perhaps you’d like to share yours on our blog?  If you would like to feature here, then just get in touch to let us know.

And if you’re a member of Piirus based at the University of Nottingham, I’d like to meet you sometime soon…

Read more articles about All Things Research . Tagged with academia, my shelfie, workspaces