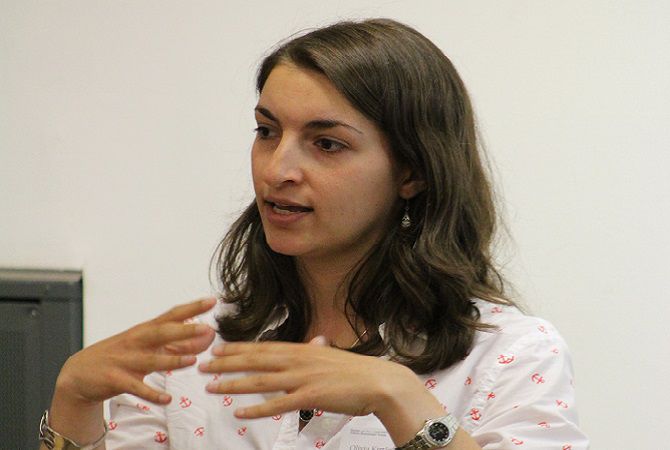 We’re delighted to feature an interview with a researcher who has a real enthusiasm for her work. This interview with Dr Olivia Kirtley provides a welcome reminder of all the good that research can do.


Tell us about the work you do.

I am a postdoctoral research psychologist in the Suicidal Behaviour Research Laboratory (SBRL) at the University of Glasgow (Scotland). I received my undergraduate degree in psychology from the University of Stirling, where I further cultivated an interest in suicide research that had begun during my A-Level psychology studies. During my undergraduate degree, I had a chance to write an essay on the topic of pain and self-harm. I had become increasingly curious about the mechanisms that underpin exactly how individuals can overcome self-preservation instincts to harm themselves; do those who self-harm experience pain differently to people who have never self-harmed? This led to an undergraduate dissertation on pain and self-harm, and then a PhD at the University of Glasgow on the relationship between emotional and physical pain in self-harm ideation (thoughts) and enactment (behaviours). The research I am currently doing is around the relationship between adverse childhood experiences (ACEs) and self-harm in adulthood.

What do you love about this work?

Where to start? It is an immense privilege to be someone with whom participants feel they can share their experiences; stories that are so often heavy with emotional pain and trauma. Particularly with participants who I have seen in the lab at the University (relative to in hospital), sometimes I am the first person they have ever told about their self-harm or their thoughts of suicide.

No two days are ever the same, so there is never a chance of being bored! One day I may be interviewing a patient in hospital after they have been admitted following an episode of self-harm, the next day I may be running psychophysiological experiments with participants in the lab, another day I may be giving a talk at a conference and using my data to tell the stories of my participants’ experiences. I love that I am constantly inspired and challenged by the people around me, whether that be participants, fellow researchers or clinical colleagues.

What are people’s first reactions when you tell them what you research?

When I tell people that I study suicide and self-harm, I experience a whole range of reactions. The majority of people are really interested and engaged with research in this area and sometimes tell me about friends or loved ones who have self-harmed or died by suicide. The suicide rates in Scotland are high, and Glaswegians are a friendly bunch, so even sometimes when I am waiting in line at the bar or to catch a bus, people start chatting to me about what I do and we end up speaking about their lived experience of suicide or of losing someone to suicide. Some people say how depressing it must be to work in suicide research, and ask me why I didn’t want to study something happier. Thankfully these instances have become fewer as time has gone on, and actually these comments tended to come from other researchers in different fields!

Sometimes people think that because I am a research psychologist, as opposed to a clinician, I spend my days writing and doing data analyses without actually speaking to people with lived experience of suicide; they don’t always recognise that my data are people and their experiences.

How different is it to the reality?

Studying suicide could not be further from being ‘depressing’. It is an area that is full of hope, energy and determination. Every one of the participants who take part in our research tells us something invaluable that helps us get that little bit closer to understanding suicide and self-harm, and what we as researchers can do to change practice and policy so that a person does not come to a point of feeling like the only option they have is to end their own life, or to harm themselves.

As a research psychologist in the area of clinical health psychology, I get to learn from the lived experience of the people who participate in my studies, and I also get to do all the study design, statistical analyses and writing of papers; it’s a good balance.

How do people react if you talk to them about the differences?

Quite a few people are surprised that researching suicide isn’t the dark topic that they think it is. People are interested to talk about the many different ways we can study suicide, and how the research we do contributes to suicide prevention, and how studies we do in the lab or in hospitals will actually go on to help people who are feeling suicidal. When it comes to suicide, myths abound, and people can sometimes be shocked that many of the things they hear in the media about suicide are just not true, e.g. that speaking to someone about suicide can ‘put the idea into their head’; As long as it is done sensitively, this is not the case. Many people also think that it is mostly young men who die by suicide, when in fact we have seen increasing rates of suicide among middle-aged men and also among young women. There are a lot of assumptions about suicide and studying suicide, and partly because of this I really enjoy doing lots of public engagement work, whether that is running live Twitter chats, blogging, or speaking at science festivals. This gives me lots of great opportunities to challenge people’s preconceptions about what it is like to study suicide, but also to dispel some of the myths and stigma that surround suicide and mental health more generally.

Thanks Olivia, it was great to talk to you.

You can also find out more about our interviewee Olivia on Twitter. If any of you, our readers would like to feature in such an interview and share what you love about your research, then please get in touch with us.