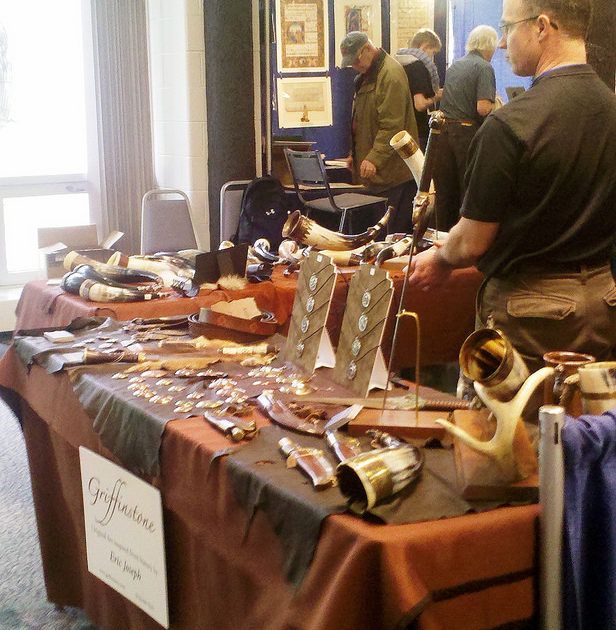 Everyone from Kalamazoo is used to the almost instant incredulous reaction after stating where you’re from: “WHAAAT?? There really is a Kalamazoo??,” most likely prompting an intonation of Glen Miller’s 1942 hit song, “I Got a Gal In Kalamazoo”. This even inspired the city to adopt “Yes, there really is a Kalamazoo” as it’s official marketing slogan, available on anything from shirts and caps, stickers / bumper stickers, buttons, pins, and what have you. Only later did I learn that to quite a different group, Kalamazoo is legendary: for every year in May, thousands of scholars from around the world descend to celebrate the four-day International Medieval Congress in Medieval Studies hosted by Western Michigan University’s Medieval Institute.

The Congress this year marked and commemorated its 50th anniversary. When the meeting first convened in 1962, some one hundred scholars attended, and the conference was held bi-annually through 1970. The amazing growth in numbers of scholars attracted led to its being scheduled as an annual event that continued to grow from a conference to a true Congress, today the largest of its kind. Now more than 3,000 scholars participate annually, the number of sessions has expanded to around 570, the original program brochure expanding into a bound book to accommodate it all.

This year’s program included – in honor of the 50th Anniversary – seven special sessions discussing the topics addressed at the very first conference in 1962. Other sessions included papers in everything from medieval art and architecture, science and technology, medical and military history, languages and literature (Tolkien and C.S. Lewis have been regulars since long before the current fantasy-film craze), music and theater (with performances and readings, of course), religion and religious orders, theology and philosophy, to law. There are special workshops or presentations of actual historical techniques: astrolabes, laying out the chevet of a gothic cathedral, a catapult, beer brewing (with a tasting!), book binding, book illumination, to name just a few.

Technological advances have engendered new organizations like the Medieval Electronic Scholarly Alliance (MESA), with workshops and sessions devoted to “Digital Humanities.” The most serious and valuable projects in this area are committed to providing digital copies of entire manuscript collections and libraries, such as those sponsored by Hill Museum & Manuscript Library (HMML), e-codices: Virtual Manuscript Library of Switzerland, and the Yale Digital Collections Center, to name a few. These projects enable scholars to access digital facsimiles of valuable historical material sources, without handling – and thus helping to preserve – the rare and fragile originals. Digitizations of manuscripts also enable collaborations, even over long distances, on these sources. There are multi-institutional international projects coordinating and producing multilingual digital editions of texts, or uniting entire groups of manuscripts from one original common source now scattered (Medingen), or those dedicated to collecting, identifying, and reassembling manuscripts and texts (“re-aggregating”) from manuscript fragments (”fragmentology,” manuscriptlink).

One of the major attractions of the congress is always the book exhibit: here you may approach representatives of the major scholarly publishers and discuss your book project. Of course they have their latest publications on display, most of which may be purchased at a 25-30% discount. There are also antiquarian and used book sellers displaying their specialized medieval collections, where you can often find that long out-of-print book you have been searching for.

And then there are the countless social meetings and events: the wine hours, society and publishers receptions, dinners, not to mention the famous Saturday Night Dance!

Don’t you wish you’d been there? I’m still recovering and reflecting … and I already have my abstract ready to submit for next year’s IMC at Kalamazoo.

For a typology on the different kinds of academic conferences see my Piirus blog.

Go here for all Piirus blogs relating to conferences.