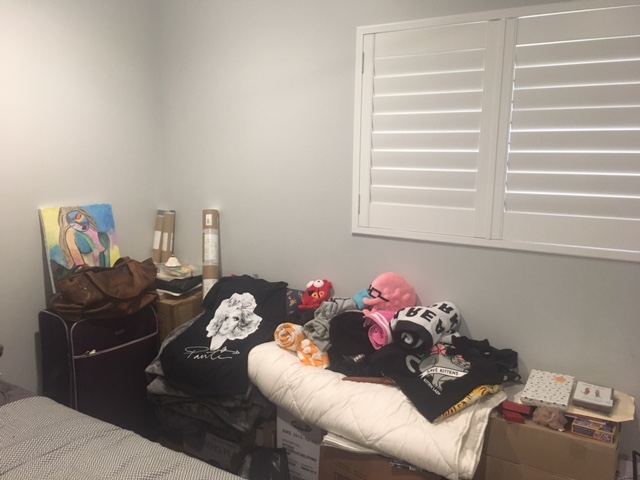 The Academic Art of Minimalism

Minimalism can be a strange beast.

1. one small tortoiseshell cat;
2. one (admittedly squished) wardrobe’s worth of clothes;
3. four blankets; and,
4. eight boxes that I can pick up, mostly filled with books, art, and all my cake tins.

My minimalism includes my cat Laks

You know – the vital things to life.

I used to own more things – enough to furnish a little two-bedroom cottage – but then last year I worked on a tiny Pacific Island. As I moved to and fro between Australia and the island as terms dictated, I gave up the lease on my home. I simply wasn’t home enough to have a settled base.

In trying to figure out what to do with a cottage-full of stuff for a year, I decided that the easiest thing was to just let it all go. I sold and gave away the vast majority of my possessions.

Following Marie Kondo’s discarding practice, I piled belongings onto the kitchen floor, picked them up and placed them in various piles of ‘Keep’, ‘Good Will’ and ‘Sell’ depending on whether they gave me a spark of joy and their condition.

For all the debate around the Kondo practice, as the piles grew larger around me, I realised that, when I wasn’t sure where I was going to be after this contract ended, how much stuff I kept mattered. I like to know that, were I to be offered my dream job interstate or overseas tomorrow, I wouldn’t be hampered by stuff.

Indeed, the necessity of channelling minimalism isn’t often spoken about but impacts on many academics. When work is so precarious, when we cannot always presume that a job in one place will last longer than the contract and so tend to move to wherever we are offered a job –

how much stuff can we be certain that it’s feasible and desirable to own? How much stuff is going to be consistently moveable?

Trying to answer this question has been something that I’ve struggled with in the last few years. I’ve watched friends in different jobs buy houses and settle into a home, while I’ve moved homes and been uncertain even when ostensibly ‘settled’. And for a long time, I wanted to own enough stuff that would fill a home. Sometimes I needed to, as a lot of rental apartments and houses in Australia come unfurnished.

But I also realised that part of me also wanted to have a life that looked more settled than it was – my way of controlling some of the chaos and anxiety that precarity brings.

Yet gathering possessions doesn’t work when push comes to shove and contracts aren’t extended despite best intentions. Right now, I’m in a ‘moving phase’ of work – and honestly lucky that I’m able to move when a good job comes along. At the end of the day, I simply can’t afford to own as much as a person who has settled into a home can, and I’ve become more peaceful about it.

I have embraced minimalism – embraced being joyful about what I own.

So while I am ferocious about keeping what is precious, but I also know how easy it is to simply collect stuff. And so I’ve started to be more mindful. At the end of the day, the stuff can be replaced at each move, but I need to make sure that I’m able to move the precious things. True, my precious things don’t necessarily look anyone else’s and nor would I expect them to, but it’s more about owning who I am as a person and understanding what I need to make moving to a new job/city/country as comfortable as possible.

The art of minimalism may be one that many academics need for practical purposes; certainly, I’ve embraced it through my need to move for work.

But, to be honest, there is something cathartic about it too. When drafting this post, it apparently made my blog editor smile to read that Laks came first in my list. I couldn’t imagine it any other way though. Much has been written about our academic identities, but they’re often not so far removed from who we are outside academia. Being peaceful with my minimalist identity (the woman who organises Laks’ move before her own) not only strengthens my faith in my academic identity but also means that I am braver in being able to move for work. When needed, minimalism is an art well worth learning.