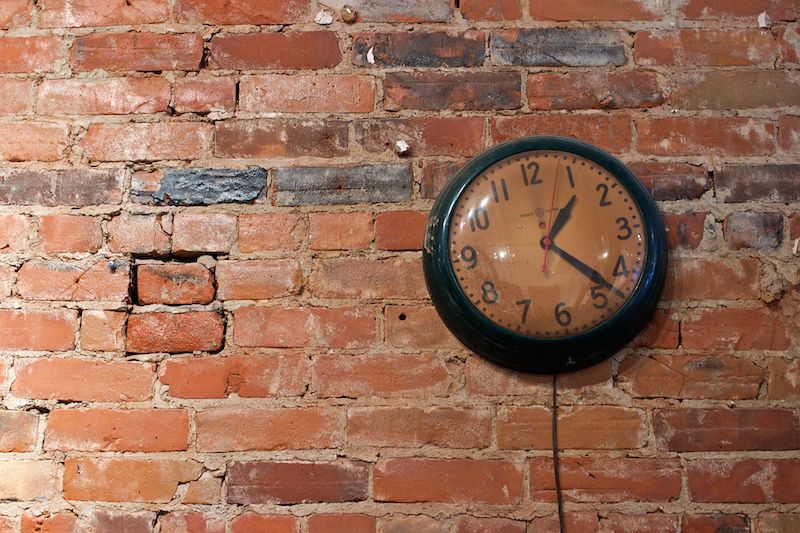 I spend a lot of my time these days wondering what it is I actually do, and what I have been doing with the last year and a bit. On grumpier days, it feels like it has been a waste of time: as though this year of searching has been a liminal gap, in which I have been a hostage to my own unemployment and incapacity to progress. In a strange sense, it hasn’t felt like ‘real’ time at all. It has felt like time out, a diversion from my projected future history. It feels unproductive, as though I’ve done nothing and moved nowhere.

But I wrote a thesis on temporality. I understand that universal time is something that can only be known through the use of advanced physics, and even then only in a limited and partial way. How time began, how it will end, and what there was and will be before and after is something that we have not yet managed to comprehend. In the eyes of the universe, my wasted time is just so much cosmic expansion.

Newtonian time, beloved of the West, which is what I understand and which is what I am bound to, is the time I perceive myself to have wasted. But this time is a cultural construct, for human time differs across the globe. In that sense, then, perhaps I can excuse my last year by suggesting that how valuable it has been is all down to perception.

What I mean is that just because I haven’t gotten to where I had hoped I would be, it doesn’t mean that I have failed to progress in life. In a lot of ways, I have achieved more in this last year than I did in the final twelve months of my thesis. I’ve been to conferences, published papers, organised and attended workshops for MEG, set up my own little editorial business, become the director of a limited company, become involved in setting up an ECR support network and an AHRC sponsored project led by two of my former colleagues, edited a reader, and been appointed as an assistant to a bid for an exhibition project. Oh, and I have been writing here, too, of course.

All of these things cross over, and impact upon my time. I’ve said before that just because I’m not officially and consistently employed, I’m not exactly short of things to do. Sometimes, it’s hard to keep things in the air: I always liked to think of myself as a well-trained juggler, but I’ve realised that perhaps all the juggling I thought I was doing in my PhD was still in one place and dedicated more or less to one end. This, on the other hand, is a Mel’s Mess of a pattern of committments. With clubs. And fire.

As a wise traveller once said, ‘Time is an illusion. Lunchtime doubly so.’ So perhaps my last year has been an extended lunchtime, with its own adventures, excitements, and really wild things. And that future history I spoke of…well, that projection was always an illusion.  The full reality has yet to be written.