Bagpipes in the LIBRARY?

Yes, indeed! Not only a piper (bribed by the assurance that no-one else ever had or would be allowed to play bagpipes in the Whittaker Library), but a saxophone quartet, singer, fiddle, cello, clarsach, and myself at the piano. My book-launch took place a couple of weeks ago, an hour before closing time. It was introduced by our Director of Academic Development, and I gave an illustrated talk. The saxophone quartet played arrangements that I’d made of pieces from Alexander Campbell’s Albyn’s Anthology (1816-18), and there were also traditional contributions, and one of Beethoven’s Scottish song arrangements, Highland Harry.

Why saxophones?, you might ask. Well, I was trying to make two points – firstly, that these tunes are still good source-material for modern arrangements – and secondly, that actually MAKING the arrangements brought home to me all the considerations that “my” late 18th and 19th century song collectors would have thought about as they made their collections.

Maybe the students still in the library late on a Friday afternoon were a bit surprised by what transpired – but I felt I’d made a statement for music librarians everywhere: we don’t just put the books on the shelves, but also write about, play and arrange music too. Although we don’t usually play it in work time! 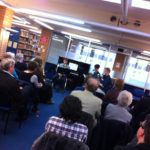